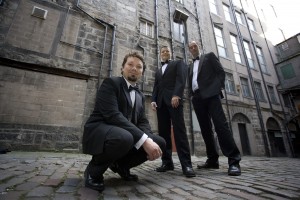 Steve studied acting at Queen Margaret College in Edinburgh. His first professional engagement was in the Haddo House pantomime where he was Dame for two years running. He then joined a touring company who travelled the north of Scotland in a musical called Closer Than Ever. It was here that he met Dan. With a shared love of swing music and a weird sense of humour, Ocean’s 3 were born.

Steve still keeps his hand in on musical theatre and has been in shows such as Into the Woods, The Last 5 Years, Jesus Christ Superstar and West Side Story. He also works as a professional role player, helping to train student doctors, offshore emergency switchboards and social workers. His job is nothing if not varied!