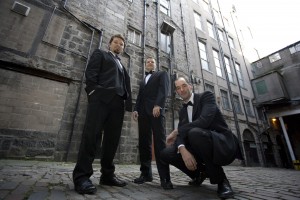 He began as an actor in musicals in his home town of Inverurie, and after training in Manchester, Dan was lucky to appear in the UK tour and West End production of Joseph and the Amazing Technicolor Dreamcoat, appearing with Stephen Gately, Lee Mead, and Darren Day among others.

Dan also worked in TV and theatre in Manchester before returning home to work with Buzz in Inverurie, as performer and director. Dan has played roles as diverse as Fagin in Oliver, Ariel in ‘Return to the Forbidden Planet, and Josh Baskin in Big, as well as playing the lead in the UK amateur Premiere of Tick Tick BOOM by Jonathan Larson.

Dan recently fulfilled a lifelong dream by having his very own musical make its première, Shhh… the Musical, to full houses and great reviews.