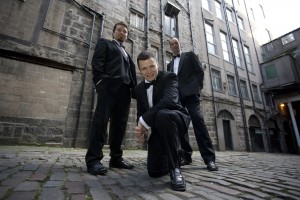 Ryan is the shortest member of the group! He is the groups Sammy Davis Junior not based on looks, only because the other two pick on him and he’s the best dancer in the group.

As well as singing with Ocean’s 3, Ryan has performed in a number of amateur musicals in the Aberdeen area such as Little Shop of Horrors, Return to the Forbidden Planet, Witches of Eastwick, Zombie Prom and appeared in the Prestigious Aberdeen Student Show a number of times.

By day Ryan is a Drama teacher, teaching in one of Aberdeen’s secondary schools as well as teaching for Scottish Youth Theatre. Then by night he takes to the stage as the one third of Ocean’s 3, some of his regular songs include numbers by Frank, Sammy, Dean and Michael Bublé.